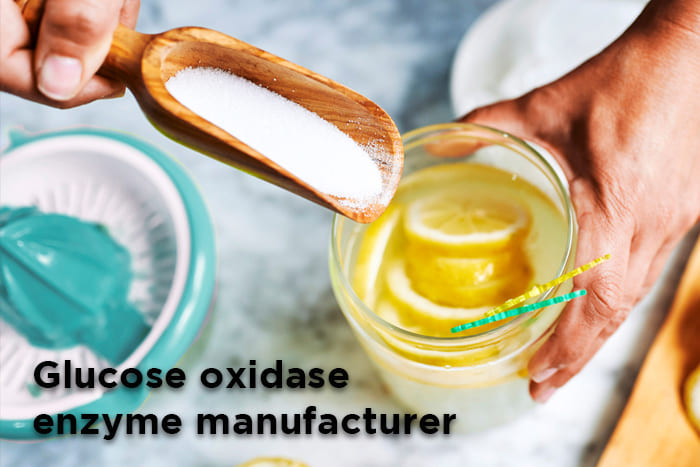 This light yellowish powder has low activity and is non-toxic in nature with majority usage in the food preservation and processing industry when compared to the other areas making the most of it.

Its widespread usage brings about a whole different competition when it comes to keeping up with its demand! Every Glucose oxidase enzyme manufacturer across the country knows the immense importance of the enzyme in various industries and most manufacturers are not able to keep up with it,unlike Ultreze enzymes. India’s biggest enzyme manufacturer and biotechnology pioneer, they have provided fne quality products globally and are currently the market leaders of Glucose oxidase enzyme.

This article aims at explaining the various ways it is used in this world.

Widespread bread making techniques include the use of high gluten wheat flour mixed with eggs, water, yeast, and glucose oxidase to bring toughness to the dough. It aids in giving the necessary strength which enables the bread to grow bigger and have a better satisfying taste and feel.

Every Glucose oxidase enzyme manufacturer knows the importance this enzyme carries in the bakery industry and even a slight delay can derail the enterprise they are dealing with.

Food preservation and processing would not have reached the current stage of ease and pace without glucose oxidase enzyme. A Glucose oxidase enzyme manufacturer knows the role this product plays in this industry and simply cannot lay back on the supply.

Glucose oxidase plays an immensely important role here by providing the boon of de-oxygenation which helps maintain oxygen levels during these processes. When compared among the other methods of de-oxygenation, Glucose Oxidase took the top position by providing the best quality oxidative metamorphism and helped keep the food fresher for longer along with significantly increasing their shelf life.

Animal breeding has quite a different turn while working with Glucose Oxidase. Incorporated primarily as a diet supplement, this enzyme acts more as an immunity builder rather than a nutrient enhancer. The de-oxygenation factor of glucose oxidase helps in creating an acidic and anaerobic environment in the animal’s gut that helps create and house important immunity building probiotics that aid in keeping the animal safer and healthier from within.

Working majorly in the gastrointestinal tract, this enzyme acts more like an immunity builder rather than a nutritional supplement or fattening agent, making it all the more important for a glucose oxidase manufacturer to maintain steady supply.

Glucose oxidase enzyme finds its way into the medical sector and is heavily used in a certain glucose monitoring device used on humans to aid proper medical diagnosis. Glucose oxidase reacts directly to the glucose present in the blood, giving comparatively better results. Although deviations are a thing in this category too, somehow in its occurrence it is easily visible and doesn’t pose any problem.

Deviations would only occur when glucose oxidase reacts with the blood glucose. Every Glucose oxidase enzyme manufacturer knows the value it holds in the battle against diabetes and would suffer immense goodwill loss upon not maintaining stable supply. Here’s where Ultreze enzymes stand out by providing quality while maintaining a steady supply to the ongoing demand.

The beverage industry, particularly the beer industry makes the most of Glucose Oxidase. This enzyme is used for several purposes which include:

Ultreze enzyme is one glucose oxidase enzyme manufacturer that has steady supplies and major contribution in all these areas and industries and has globally delivered quality enzymes at every stage, making them the current best enzyme manufacturer in the country.